Deprecated: Constant FILTER_SANITIZE_STRING is deprecated in /home/glampingperutrek/public_html/wp-content/plugins/wordpress-seo/src/conditionals/third-party/elementor-edit-conditional.php on line 22 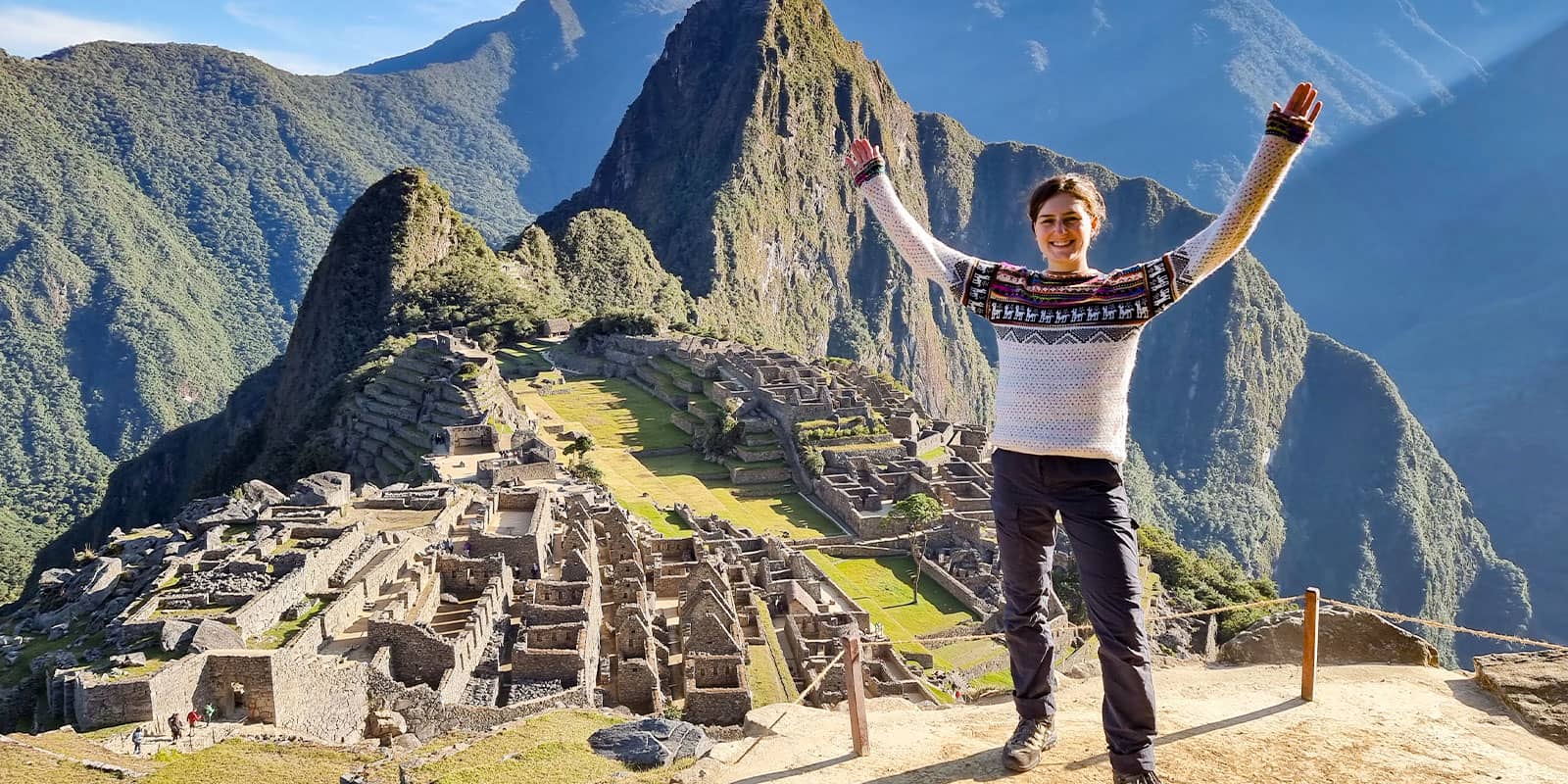 The Southern part of Peru is home to 7 of the top 10 attractions in the whole of Peru. Below we have put together a variety of Best Machu Picchu Tour packages, that will take you to astonishing destinations that will remain entrenched in your memories for the rest of your life. The journey starts at the capital city of the Incas, Cusco. A city rich in history. From the Pre -Inca, to the great Inca civilization, to the Spanish Colonization and finally modern Cusco with a scattering of modern influences. The Sacred Valley the heart of the Incas, sits nettled in the valley offering temperate weather, a welcomed reprieve from the high altitude of Cusco. Find the many small villages and towns around the valley, with its inhabitants still keeping their Inca culture alive and thriving and speaking Quechua (the indigenous language of Peru).

Join one of our many trekking routes to Machu Picchu, that pass incredible landscapes, stunning glacial lakes, isolated villages with locals still leaving their most authentic life, as well as towering snow-capped mountain peaks. Get the opportunity to visit the most unique and vivid natural creations like Rainbow Mountain and the Red Valley.

We have put together the most dynamic and unique combination, keeping in mind your comfort and need to indulge in each and every moment of your vacation. Glamping Peru focuses on personalized attention and tailor-made tours. You can always let us know if there is a particular combination that strikes your fancy and we will do our best to accommodate your needs.

The name Choquequirao means “Cradle of Gold.” Located above the raging, glacier-fed Apurimac River, surrounded by towering snow-capped peaks and seated on a high ridge, Choquequirao is a remote and rarely visited ¨Lost City of the Incas.¨  The Inca archeological site is considered to be the sister to Machu Picchu. It is less known and less visited but three times larger than Machu Picchu.  It was one of the last refuges for those Incas who continued to resist Spanish occupation after the conquest.  The site was eventually abandoned and became covered by dense cloud forest vegetation and to this day archeologists continue to discover new sectors of the city.

Choquequirao is situated between the jungle and the Peruvian Andes, on a mountain at 3033m/9,951ft. Its secret to keeping away the crowds is also part of its charm: it is only accessible by footpath. It’s a relatively strenuous 40k/25 mile trek roundtrip, with highs and lows between 1400m/4,593ft. and 3100m/10,170ft.

On this adventurous trek we will walk on the extensive system of Inca trails, hike through high Andean landscapes with majestic glaciers, descend into deep canyons where the condors fly and pass through biologically diverse cloud forest ecosystems. You will also see native animals such as Andean Condors, birds, native flora and fauna, orchids and so much more! 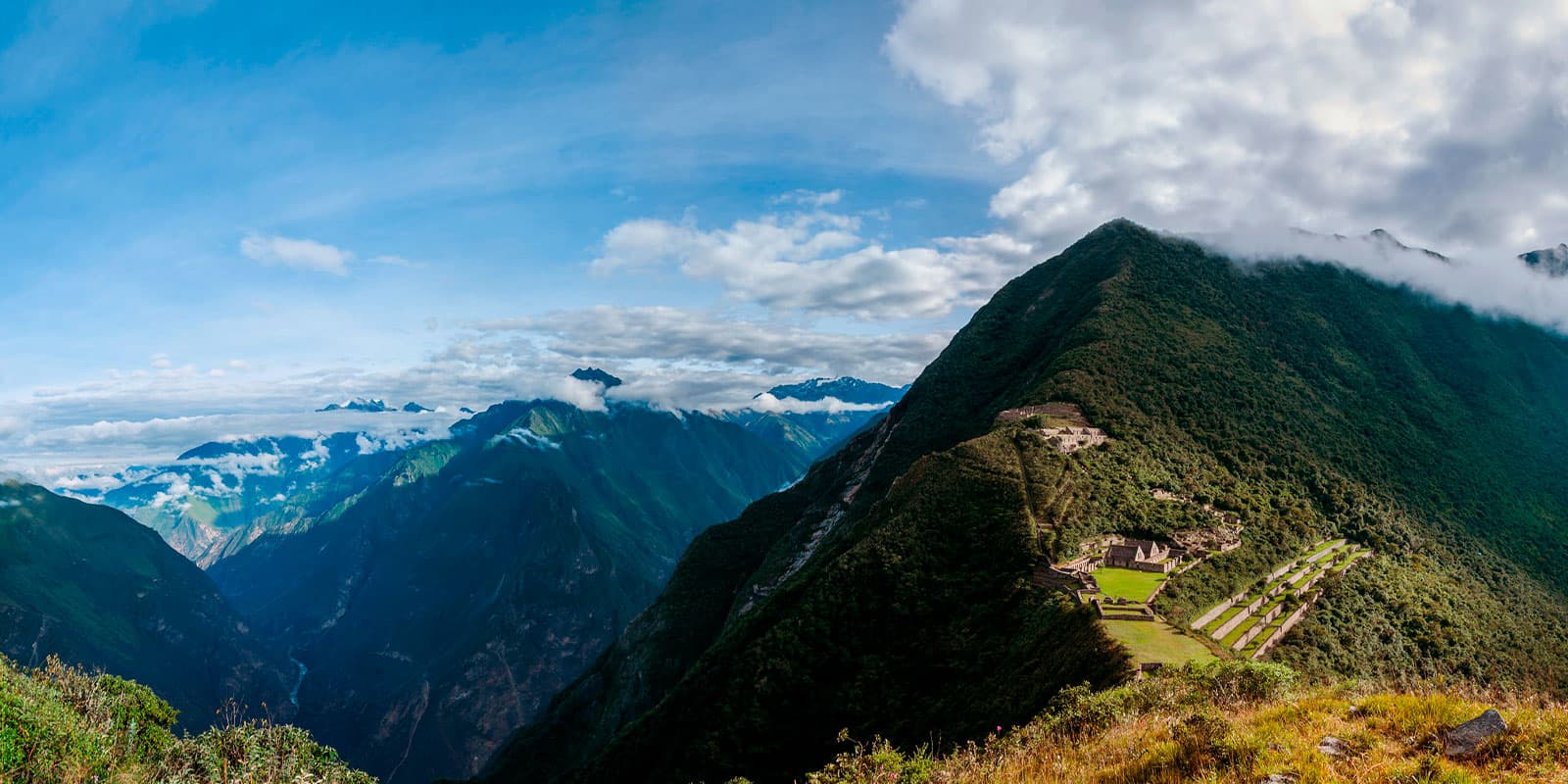 Glamping Peru Treks, as a specialist in trekking OFF the beaten track, has the best designed itinerary in which you will visit the 2 most important Inca cities of the Cusco region: Choquequirao and Machu Picchu. We include the hike up to Llactapata which is located right in front of Machu Picchu. From this viewpoint, enjoy the greatest perspective of Machu Picchu and the surrounding mountains like Huayna Picchu and Machu Picchu Mounts as well as Salkantay Mountain. You will also hike along a section of the original Inca Trail on the way to the citadel from Llactapata. 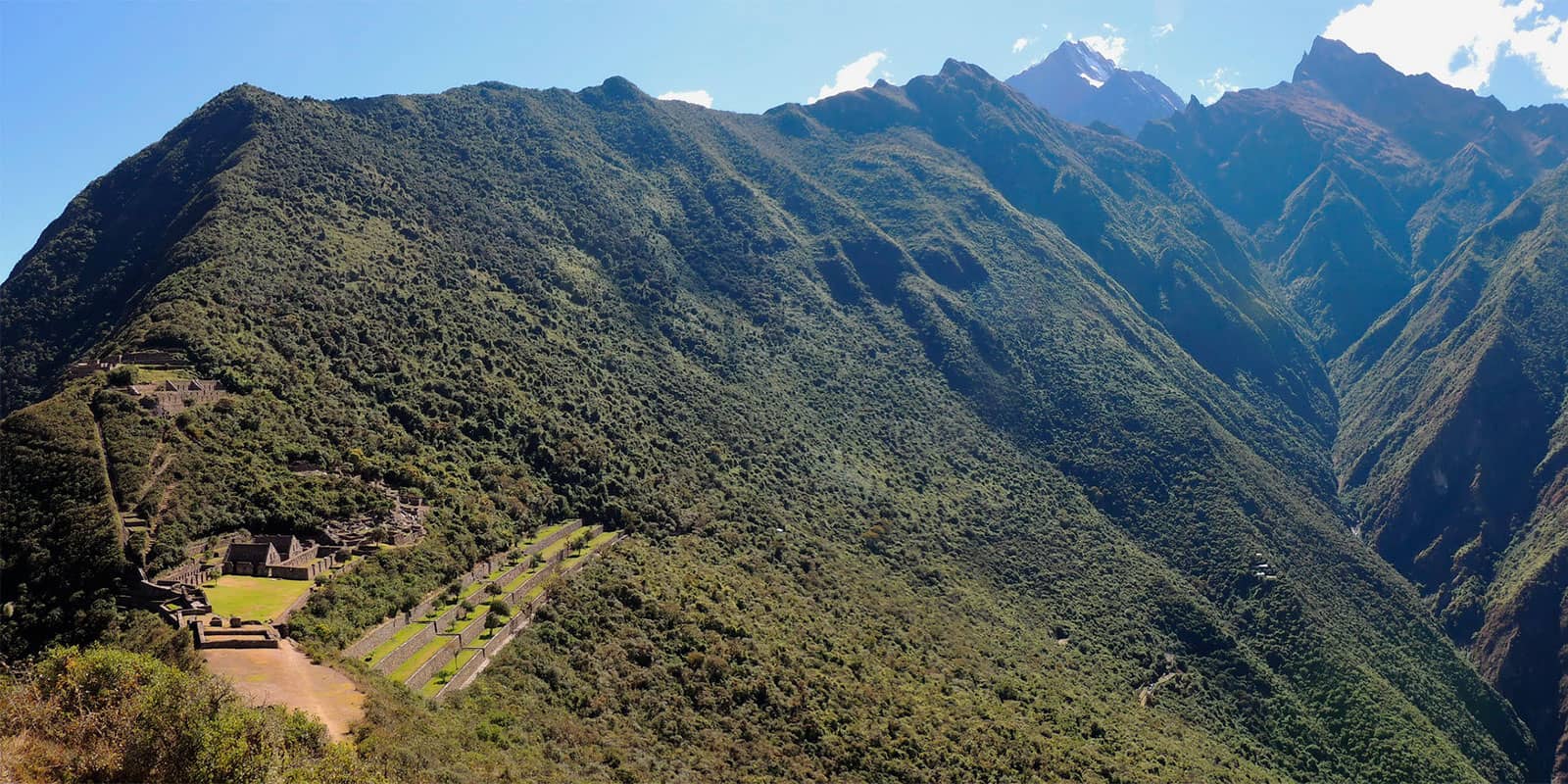 Cusco may have been the capital of the Inca Empire and called the navel of their world, but the Sacred Valley was the heart. Only about 15kms/9.3 miles north of Cusco as the condor flies, the Sacred Valley brings you the most important Inca sites besides Machu Picchu. The valley has long been the home of attractive colonial towns, isolated weaving villages, handicraft markets and lofty 10th and 11th century Inca Citadels of Pisac, Ollantaytambo and Urubamba. You will also have the opportunity to visit the Pre-Inca Maras Salineras and Moray terraces, which were made by building containment walls filled with fertile earth. These terraces were watered through a complex irrigation system and an impressively constructed rainwater storage system. Your tour culminates with the amazing Citadel of the fabled Lost City of the Incas, Machu Picchu. The Inca City of the Historic Sanctuary of Machu Picchu is a masterpiece of art, urbanism, architecture and engineering of the Inca Civilization. The harmony of the architecture with the mountain, at the foot of the Huayna Picchu, the result of a gigantic effort to blend advanced architecture with nature.

The Vistadome Train will  give you an unmatched and mesmerizing panoramic train journey.  The 3.5 hour journey from Cusco (Poroy Train Station) to Aguas Calientes takes you through the Andean meadows nestled amongst the high snow-capped peaks, the deep river valleys and hillsides covered with tiers of ancient Inca farming terraces.

Be immersed in Andean Culture through on-board live music, the vast landscape visible through the glass ceilings and windows, a dance show and food carefully prepared with local ingredients.

You will travel from ridges of high mountains, down to sub-tropical jungle near the Amazon, all the way to Aguas Calientes. Enjoy this picturesque town in the afternoon, then get ready for your visit to the UNESCO World Heritage site of Machu Picchu (2,400m/7907ft)! Find yourself mesmerized as you travel back in time to this magical place, the sacred and mysterious Machu-Picchu, “The Old Sacred Mountain.” Take your time exploring the Inca ruins rich in the history of its past and thriving culture of the people who once resided there.

This  is a  relaxing 1 day trip  to the Citadel of  Machu Picchu. The pampered experience begins as you board the luxurious Vistadome Train. Travel through the picturesque Andean Valley, will lush green mountain tops and  contrasting snow-capped mountains peaks like the great Mt Veronica. Enjoy the comfortable leather seats and elegant setting. Engage in the on-board dance show and the delicious  local snacks. After your arrival in Aguas Calientes, also known as Machu Picchu town, we make our way by bus to the majestic  and world  famous Inca City of Machu Picchu (2,400m/7907ft). Find yourself mesmerized as you travel back in time to this magical place, the sacred and mysterious Machu-Picchu, “The Old Sacred Mountain.” Take your time exploring Machu Picchu, the Incan ruins rich in the history of its past and the thriving culture of the people who once resided there.

This is the perfect itinerary for those looking for the best highlights from the Cusco region. Glamping Peru Treks  will take you a luxurious trip, staying in the best hotels in the region. Visit the Imperial City of Cusco, the most important Inca sites in the Sacred Valley and the the majestic Machu Picchu, the UNESCO World Heritage site rich in history of its past and the thriving culture of the people who once resided there.

Glamping Peru  will take you on an exclusive tour to greats historical sites like the military structure of Sacsayhuaman. Visit the most important temple of the Inca Empire, Korichancha ( the temple of the sun), where the Spanish build the church of Santa Domingo. a true reflection of how the Spanish overcame the very strong cultural ties of the Incas. Visit carefully selected archeological sites  in the  Sacred Valley. Enjoy the most pampered, relaxed and comprehensive tour of the Cusco region.

Glamping Peru Trek’s unique and specially designed 4 day Wilderness Salkantay Trek to Machu Picchu takes you around to the stunningly spectacular peak of Mount Salkantay. You will be trekking off the beaten track on your way to see one of the most sacred peaks in Inca culture. Mount Salkatay is the second tallest mountain in the Cusco region standing at an imposing 6,277m / 20,577f). We will get to explore a gorgeous turquoise glacial lake, waterfalls, and unforgettable Peruvian cloud forest. In this special cloud forest, you have the opportunity to taste the organic fresh fruit grown here such as bananas, oranges, avocados, pineapple and much more.

The trek takes you off the beaten, this has less rules then the Inca Trail, allowing us to give you the most extravagent and  lush camping experience. Visit the world-famous Lake Humantay before making your to the majestic Inca City of Machu Picchu.

Humantay Lake Trek is an extremely scenic two day hike to Humantay Lake through the local indigenous villages of Iscuchaca and Limatambo keeping the Inca traditions alive. The lake is situated at the base of the majestic glacier covered Salkantay Mountain Range. The views are absolutely breath taking. On the second day, you hike to the highest point of the trek (4,650m/15,367ft). From this vantage point, you can take in nature at its purest form, feeling at one with the massive Salkantay, Humantay, and Huayanay snowcapped mountains surrounding you. Finally, you take a detour off the main trail to the panoramic and truly exquisite turquoise Salkantay Lake.

On this two day adventure, you enjoy the peacefulness and serenity of nature, as well as its exquisite beauty. Book a private tour or call our sales team to add more items to this itenerary and make this the most magical and comprehensive trip.

For the best all inclusive tour package, that gives you everything your heart desires, this Glamping Peru Treks itinerary is exactly what you are looking for! We bring you to the most important places in Cusco, the capital of the Inca empire, the Sacred Valley with all of its treasures and archeological sites, and the crowning jewel, the UNESCO World Heritage site of Machu Picchu!

Glamping Peru  will  set up in exclusive 4*/5* hotels and you will  travel on the luxurious Vistadome Train to get to Machu Picchu.

Explore the capital city of the Incas, the picturesque and architecturally rich City of Cusco. Discover Sacred Valley, the heart of the Incas, the agricultural hub of the Cusco region, with its organic and decadent foods. Follow that with a mild hike of the short 2-day Inca trail. Doing 1/3 of the famous Classic Inca Trail to Machu Picchu.  Arrive in Machu Picchu through the Sun Gate for the gorgeous, post card worthy pictures of the great Citadel of Machu Picchu. Visit the ageless archeological sight of Winay Wayna, aptly named after the orchid abundant in the area, a Quechua word meaning “forever young”.  End of this once in a life time experience at the strikingly beautiful and unique Rainbow mountain.

This package gives a bit of everything, plush hotels, a bit of trekking, history, sampling of local cuisine and cultural immersion.  All our tours are tailor-made to give the best of what the Cusco region has to offer.